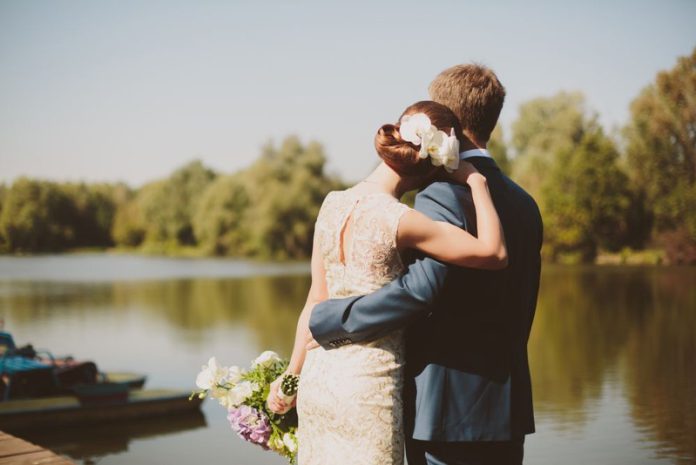 If you’re planning or attending a military wedding, you may notice a few quirks that are unique to these types of celebrations. While much of it will be the same and it is definitely still a wedding, you’ll want to prepare yourself for a few new twists. Though the likelihood is that if you make a misstep at a military wedding, it’ll turn out fine, it’s always nice to know what you’re doing ahead of time.

Do: Be Aware of Wedding Ring Protocol

This one really only applies to you if you’re the one getting married in a military wedding, in fairness. Note that you are allowed to wear that classic men’s wedding band you picked out with your dress uniform. If you have a set of durable wedding rings (e.g., engagement and wedding ring, or ring and enhancer), those only count as one of the two you’re allowed to wear at a time.

Don’t: Freak Out When Someone Draws a Sword

Relax — they aren’t coming for you. You haven’t done anything wrong. One of the most beloved military wedding traditions is for the bride and groom to walk under an arch of swords or sabers after the ceremony. It’s also tradition to cut the cake with a saber or sword. Is it over the top? Yes. Is it a bit unnecessary? Technically, yes. Is it cool as shit? Also, yes.

Do: Have the Saber Arch

Speaking of swords, make sure you have the saber arch. If nothing else, it looks sick. Military members line up in two lines across from each other and create an arch with their sabers that the couple walks through. Your branch will dictate where and when the arch is set up, and whether you’re using sabers or swords, but it’s something that military and civilians alike can appreciate the look of.

If in uniform, the groomsmen do not wear boutonnieres. As a sign of respect, nothing can be pinned to the uniforms – not even a cool flower attached to a safety pin. You do, however, get to wear your fancy white gloves and carry a saber, so you’ve got that going for you.

Do: Include Rank on Wedding Invitations

Military brides can wear earrings in certain circumstances, as well as rings (obviously). Military grooms can wear rings, but that’s about it. Anytime you’re in uniform, you’re expected to abide by the code of dress associated with it, so make sure you’re clear. This doesn’t apply to guests necessarily, though it’s probably polite to abide by the spirit of it and tone down jewelry unless told otherwise.

Do: Wear Your Dress Uniform

While not a requirement, active duty and veterans have the option of wearing dress uniforms to a few personal events, and weddings are the most common occasion. If choosing to do so, remember the guidelines regarding dress and grooming when in uniform.

When attending a military wedding, civilians may get a “worse” table placement than they feel they’re due. This isn’t personal, though. When creating the seating chart at the military wedding, the couple in question has to take rank into account. If you’re the groom’s college roommate but a four-star general is in attendance, you’re probably going to lose this battle (no pun intended) so take it in stride. High-ranking officials, by default, are sat at a place of honor out of respect. So, take your lower table or enlist and try to speed-run the ranks. The choice is yours.

Do: Place a Flag Somewhere

Whether you’re getting married or just helping plan, almost all military weddings display a flag in a prominent location. This is traditionally to the left of the chaplain, though it technically doesn’t have to be.

Don’t: Assume Your Pastor Can Celebrate Your Wedding (Solo)

If you’ve got your own officiant in mind, don’t just assume you can bring him if you’re having your wedding on military grounds. Chapels will have their own chaplain who you want to meet with ahead of time. Of course, you can have your own minister or whomever you’d like to officiate, but you’ll want to bring your officiant on to concelebrate with the military chaplain. If that’s the route you want to go, make sure the chaplain is aware of this ahead of time.

Do: Pay Attention to the Venue

You’re allowed to hold a military wedding at whatever venue you like. However, you also have the unique right to hold your wedding at either a military chapel or academy grounds. Obviously, which chapel or academy you use will depend on your particular branch, but you’ll be able to use the chapel for free (though etiquette dictates you make a donation to the chapel).

Going this route is not only in keeping with military wedding tradition, but it also is quite the shrewd economic decision as couples spend five figures on a wedding venue on average.

While there’s a bit more work to them, military weddings just look good. If you’re getting married in one, it can add a bit more stress — but with proper planning, you’ll pull it off just fine. If you’re just attending, do a bit of background research and just do your best. If you make a small misstep here and there, no one is going to judge.

Dewi - August 10, 2022 0
Roowedding.com - Picking a bridesmaid dress is a kind of fun thing in your wedding plan. While brides and grooms always become the center...

Dewi - August 3, 2022 0
Roowedding.com - One of the advantages of using dried flowers for wedding decor is their durability and longevity. Dried flowers are currently the most...

Dewi - July 29, 2022 0
Roowedding.com - Spring and summer are ideal seasons for vacations and weddings. For most brides, these seasons define the ambiance of their wedding, including...

15 Best Spring and Summer Wedding Color Schemes to Apply in...

Dewi - July 26, 2022 0
Roowedding.com - Spring and summer is the best time to hold weddings. There are many benefits to having a wedding during this season, especially...

Dewi - July 21, 2022 0
Rowedding.com - Nowadays, people are trying to integrate nature into their wedding plans. They incorporate natural elements into the decor, hold outdoor and nature...