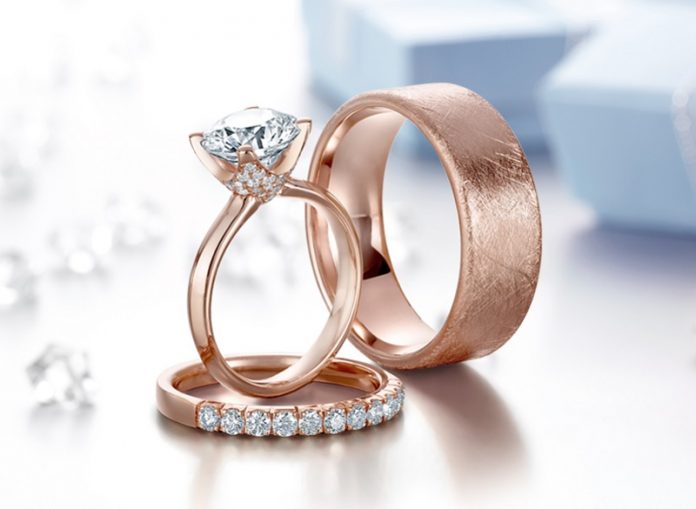 An engagement ring indicates that a person wearing it is engaged to be married. It is presented to a partner by a prospective spouse when a proposal is made for marriage or directly after it is accepted. This is a custom relevant to primarily Western countries and represents a formal agreement of marriage between the partners. Generally, it is the prospective bride who wears an engagement ring but in some communities both the parties wear one.

The earliest engagement rings can be traced back to ancient Rome. In the second century BC, the Roman bride-to-be was given two rings. One was of iron that she wore in the home while attending to daily chores and one of gold that she wore outside her house. At first, Romans wore only iron rings, and the privilege of wearing gold rings in public was accorded to senators and ambassadors only. Later the right was extended to commoners too, and brides-to-be were also included in this category.

The mid 7th century laid down that an engagement ring was like a pledge towards an ultimate betrothal though nothing was to be committed in writing. It also saw the custom of wearing the engagement ring as a public admission of marriage in advance to prevent the prevalence of hidden relationships.

Renaissance to the Victorian era

The popularity of diamond rings declined drastically after the World War I and even further after the Great Depression. Soon after, the diamond cartel of DeBeers started a marketing campaign that would have a lasting impression on the minds of people about the aura behind a diamond engagement ring. The campaign first sought to educate the public about the 4Cs of choosing a stone (cut, clarity, colour and carat). Then in 1947 came their famous slogan “a diamond is forever”. This not only persuaded people to gift diamond rings as a token of love alone but it also made people see diamonds as a form of investment and a hedge against inflation and recession. The effectiveness of the campaign of diamond rings can be felt even today.

An engagement ring like any other piece of jewelry is available in various styles and designs. ADC are one example in this case. Walk into the Australian Diamond Company showroom in Melbourne, and you will be spoilt for choice. You will get the generally preferred settings on platinum and gold, but common metal rings such as silver, steel and titanium are also available.

Whatever the design or pattern and the cost of an engagement ring, it is the love and commitment behind the gift that matter in the long run.

How to Pick Your Own Engagement Ring

Which metal should I choose for my wedding ring?

Wedding Ring Ideas with a Beautiful Custom and Modern Design

Dewi - May 19, 2022 0
Roowedding.com - The industrial wedding theme is actually a flexible concept that can match up with other ideas. From the minimalist, elegant, and...

Dewi - May 13, 2022 0
Roowedding.com - After you got the theme for your wedding, it's time for you to begin choose about decorations, venue, and invitation. There are...

Dewi - May 9, 2022 0
Roowedding.com - A Perfect wedding is what all brides really want. Since this is a special moment, they want everything to look amazing even...

Dewi - April 28, 2022 0
Roowedding.com - How your Halloween wedding would run perfectly it's depending on your decorations and wedding costumes. For this, there is a lot to...